Just added to your cart

A User's Guide To Masks: What's Best At Protecting Others (And Yourself) 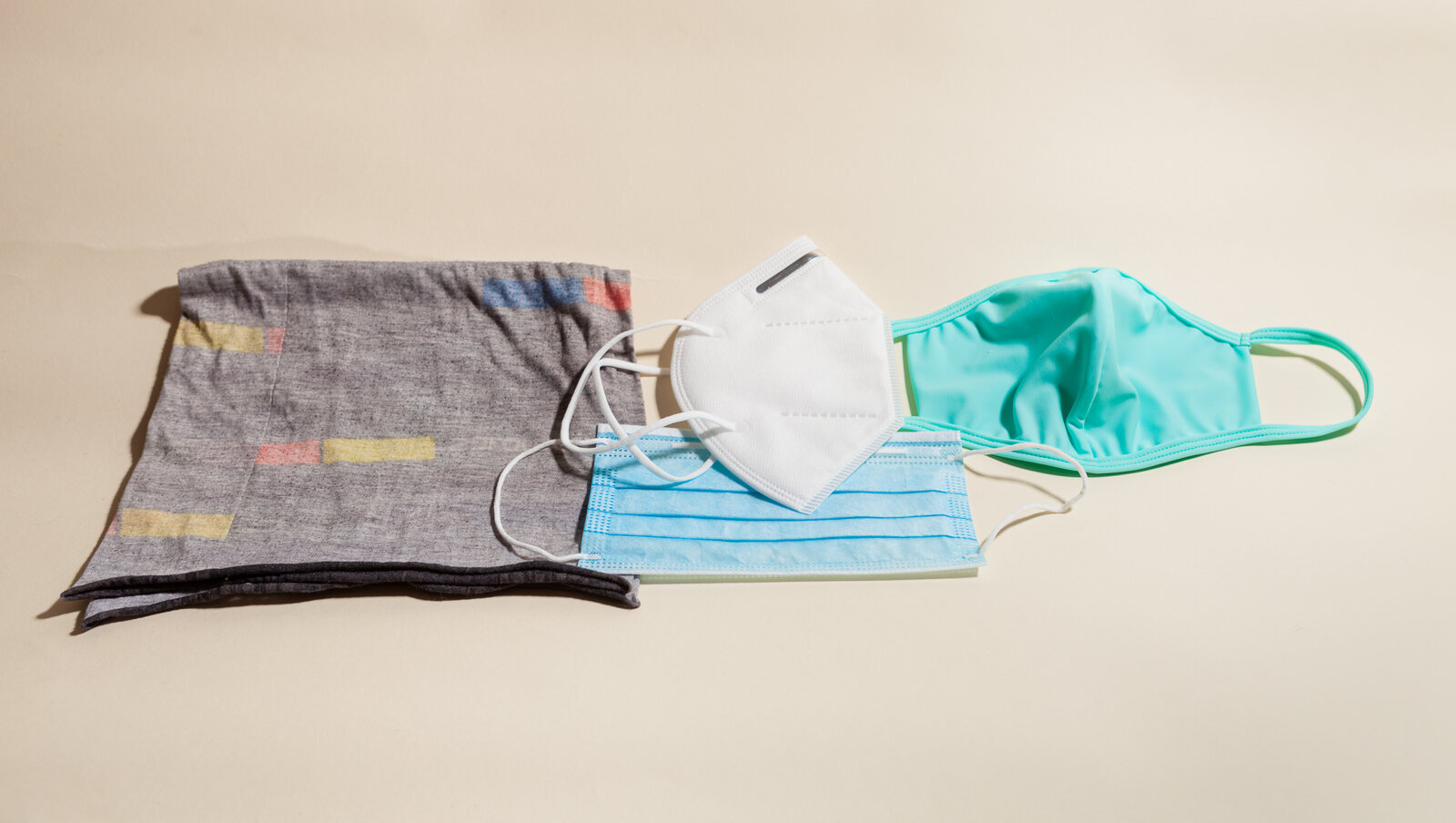 Left to right: a neck gaiter (aka a buff) that slips over the head; a KN95 respirator, a version of the N95 respirator used in U.S. hospitals; a pleated surgical mask (below the KN95); a cloth mask. Photo illustration by Max Posner/NPR

So you want to wear a face mask? Good call.

A growing body of evidence supports the idea that wearing face masks in public, even when you feel well, can help curb the spread of the coronavirus — since people can spread the virus even without showing symptoms. That's the main reason to wear a mask: to protect other people from you.

Face masks can also offer the wearer some protection — though how much varies greatly, depending on the type of mask. No mask will offer full protection, and they should not be viewed as a replacement for physical distancing of at least 6 feet from others, frequent hand-washing and avoiding crowds. When you combine masks with those measures, they can make a big difference.

But what kind of mask is best?

When choosing a mask, experts say focus on the fabric, fit and breathability. How well a mask protects is a function of both what it's made of and how well it seals to your face. But if you can't breathe well through it, then you're less likely to keep it on.

Here's a look at different kinds of masks you might consider and how effective they are at protecting the people around you — and you as well.

Since the Centers for Disease Control and Prevention says people should wear cloth face coverings in public, we'll talk about fabric masks first. But if you've purchased a medical mask or respirator, scroll down for some important notes — like how to spot if you've got a fake. 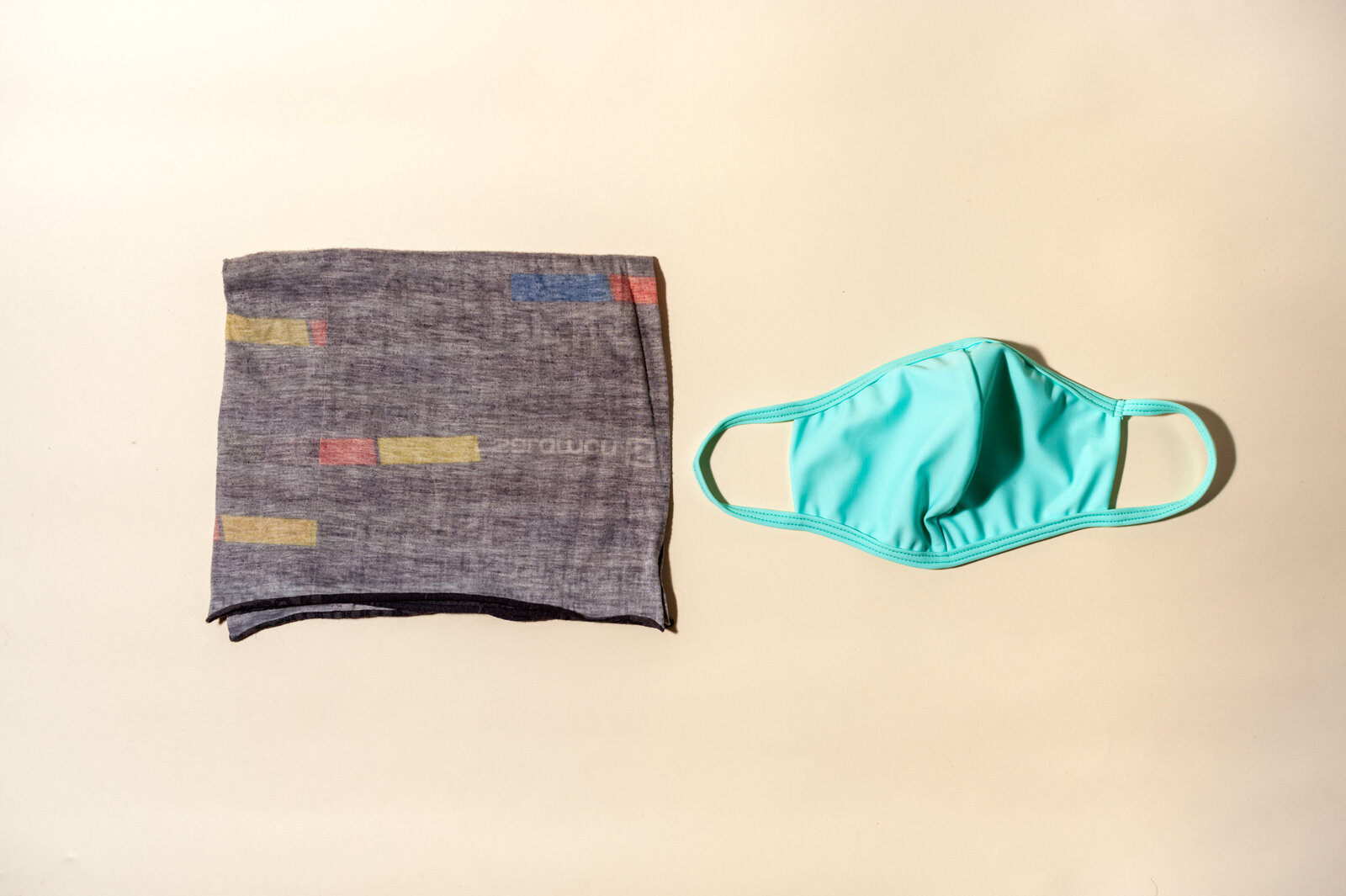 A neck gaiter and a cloth mask. Photo illustration by Max Posner/NPR

First, consider the fabric itself. "The tightness of the weave is really important. That's the first thing I would ask people to look into," says Supratik Guha, a professor of molecular engineering at the University of Chicago. To check your fabric, hold it up to a light: If you can easily see the outline of the individual fibers, it's not going to make a great filter.

Researchers say a tight-weave 100% cotton is a good bet. That's because at the microscopic level, the natural fibers in cotton tend to have more three-dimensional structure than synthetic fibers, which are smoother, says Christopher Zangmeister, a researcher at the National Institute of Standards and Technology. That 3D structure can create more roadblocks that can stop an incoming particle, he explains.

Zangmeister co-authored a new study in ACS Nano that tested how well dozens of different materials filtered. While two synthetics, including one that's 100% polyester, did well, most synthetics ranked near the bottom, he says. But even a mask made out of synthetic fibers is better than no mask at all, he says.

A good option: a mask made of two layers of a tight-weave fabric with a built-in pocket where you can place a filter, says May Chu, an epidemiologist at the Colorado School of Public Health who co-authored a paper published on June 2 in Nano Letters on the filtration efficiency of household mask materials.

The best bet for the material to slip in as a filter is polypropylene, which is derived from plastic, says Chu. "If you go to Walmart, you look for Oly-fun, which is the brand name of that fabric. It's also called spunbond," says Chu, who's a scientific adviser to the World Health Organization and helped craft its recent detailed guidance on cloth masks.

Chu says polypropylene is great as a physical filter but has another benefit: It holds an electrostatic charge. In other words, it uses the power of static electricity. Think of the static cling that can happen when you rub two pieces of fabric together, says Chu. That's basically what's happening with this fabric: That "cling" effect traps incoming — and outgoing — droplets. "That's what you want — the cling is what's important," Chu says.

And unlike other materials, polypropylene keeps its electrostatic charge in the humidity created when you breathe out, says Yi Cui, a professor of materials science and engineering at Stanford University who co-authored the Nano Letters study with Chu.

Cui and Chu note that polypropylene will lose its electrostatic charge when you wash it, but you can recharge it by ironing it or by rubbing it with a plastic glove for around 20 seconds. Once you've got static cling, ka-ching — you're back in business. Cui says a two-layer tight-weave cotton mask alone can filter out about 35% of small particles. But adding a filter made out of two layers of charged polypropylene could boost that filtration efficiency by as much as another 35%, Cui says. You still want a cotton layer closest to your face, he says, because it's a more comfortable material.

If you can't get your hands on polypropylene fabric, reach for tissues: Take two sheets of facial tissue, fold them over and put them inside your mask's pocket so that you end up with a four-layer filter that you can change out daily. "Surprisingly, the four layers of paper gives you adequate protection," says Chu — though tissues don't have the added power of electrostatic charge.

If neither of those are options, a mask made of three or more layers of tightly woven cotton will also do a decent job, Chu says.

"Imagine if you have a hose. You put your thumb over part of it, and the water just goes around it. In this case, the [air] flow will go around that filter," which defeats the purpose of using a filter, he explains.

Shape also matters: A mask's ability to filter out particles depends on not just what it's made out of but how well it seals to your face. When it comes to cloth masks, those that cup tightly to your face are best, Cui says. Masks with pleats or folds are also a good choice: The folds expand so that you have more air flowing through the fabric itself instead of leaking out through gaps at the sides of the mask. Masks with a flat front design are less effective, he says.

Another trick to improve the seal of your mask: Add a layer of pantyhose. Cut a length of hose about 8 to 10 inches long, from top to bottom, from one leg on a pair of hose, and pull it on top of your mask. This forces particles that might have otherwise gone around the loose edges of the mask and been inhaled to instead go through the mask, which can filter them out, says Loretta Fernandez, a researcher at Northeastern University.

What about neck-gaiter masks (also known as buffs)? Often made of synthetic fabric, they are designed to cover your face, nose and mouth and wrap around you. "There would theoretically be less chance for the air to escape laterally out of the sides like it would from a mask that's open on the side," says Dr. Abraar Karan, a physician at Harvard Medical School who's working on Massachusetts' COVID-19 response team.

Avoid masks with exhalation valves. Some cloth and disposable masks come with an exhalation valve at the front. The valve makes it easier to breathe out, but it also releases unfiltered air, so it doesn't protect others if you're contagious. And protecting others is the primary reason to wear a mask.

Keep it clean. Experts say cloth masks should be washed daily with soap or detergent and hot water. Make sure the mask is completely dry before you reuse it, as a wet mask can make it harder to breathe and can promote the growth of microorganisms. 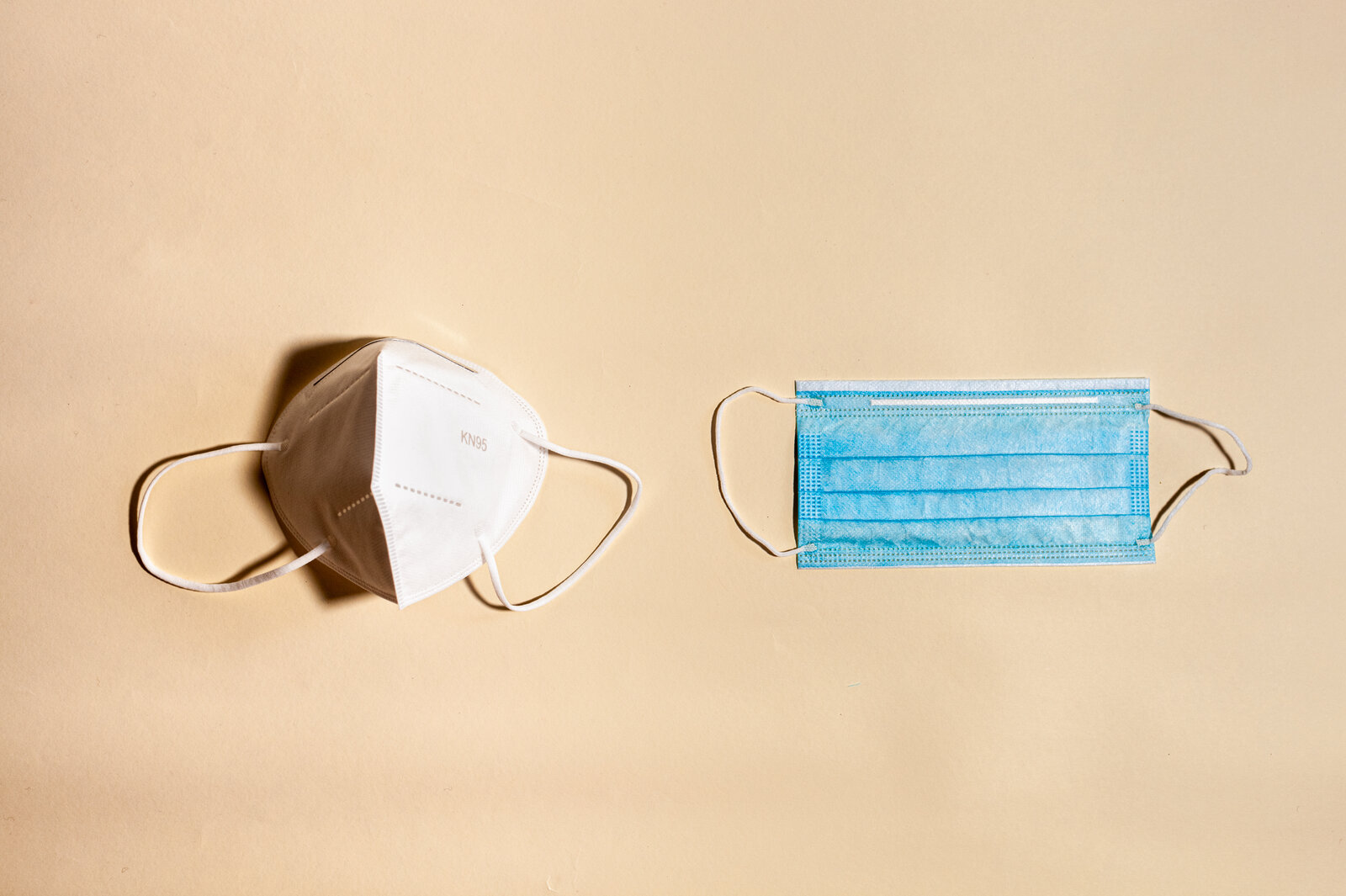 A KN95 mask and a surgical mask. Photo illustration by Max Posner/NPR

N95 respirators: N95 respirators are designed to create a tight seal around the nose and mouth. When worn correctly, they can block at least 95% of small airborne particles. These respirators are great at protecting both the wearer and the people around the wearer. One reason they're so effective: N95s are made out of many layers of fine polypropylene fibers, which, as we've discussed, use the power of static electricity to trap incoming and outgoing particles and droplets.

But experts say N95s remain in short supply and should still be reserved for health care workers and first responders. If you do get your hands on an N95, you should know that some of these respirators out there are fakes. The Centers for Disease Control and Prevention has some tips on how to spot a counterfeit respirator.

KN95 respirators: A KN95 respirator is regulated by the Chinese government; like an N95, it's supposed to filter out at least 95% of small airborne particles. However, testing has revealed that the actual performance of many of the KN95s for sale in the U.S. "is all over the place," and many are counterfeit, says Avilash Cramer, a doctoral candidate at the Harvard-MIT Health Sciences and Technology program and a volunteer with PanFab, an effort to address shortages of medical devices and personal protective equipment amid the pandemic.

While some counterfeits may indeed filter out at least 95% of particles, "some are catastrophically bad. Some are falling apart in our hands," says Cramer, whose recent work with PanFab has focused on spotting and testing fake respirators. Trying to determine if a KN95 is counterfeit can be hard, he says, but here's one telltale sign: If the packaging says it's NIOSH approved, don't trust it — because a U.S. government agency like NIOSH (the National Institute for Occupational Safety and Health) would not approve a mask made to another country's standard. If you've got a KN95, Cramer says to check Appendix A of the Food and Drug Administration's emergency use authorization to see if the model you have is authorized.

Bottom line: If you have a KN95, just know it's possible you might not be getting nearly as much protection as you think. So be sure to keep up with those other habits to help keep you safe, including physical distancing. "Wearing even a genuine respirator doesn't make you invincible, so those habits are good no matter what," Cramer says.

Surgical masks: Surgical masks are disposable coverings worn loosely around the face. In short supply at the start of the pandemic, they're becoming more widely available. They're primarily designed to protect other people from the wearer and to block large particle droplets or splashes in the air, although not very small particles. Many surgical masks are made of paper, though some are made with polypropylene, says Lisa Brosseau, a research consultant with the University of Minnesota's Center for Infectious Disease Research and Policy. Research has found that surgical masks can block the vast majority of respiratory droplets emitted by an infected person. But how well a surgical mask protects you, the wearer, from smaller particles can vary widely when tested with the same methods used to test N95 respirators. For example, one surgical mask that Cui tested blocked around 30% of small particles, while others filtered out up to 80%.

Brosseau says she's seen some surgical masks that have been cleared for medical use by the FDA and have better filtration efficiencies, but most masks sold in the U.S. haven't gone through the FDA approval process.

Regardless of whether you choose a cloth or surgical mask, she says, be aware that this doesn't mean you can suddenly be in prolonged close contact with others. These masks might buy you a few extra minutes of protection, she says, but "not hours. Not lengthy periods of time."